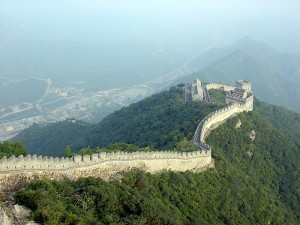 China is such a fascinating and diverse country. Backpacking in China can be complex and confusing at times; however, that’s what makes it such an adventure. Where else can you marvel at skyscrapers in metropolitan cities, ride on horseback through sprawling countryside, sail on a bamboo raft through rivers flanked by mountains, cuddle a panda and stand on the spectacular Great Wall. This country really does have it all.

China is a relatively inexpensive country and by staying in hostels and eating in local restaurants you can get by on a budget of around £15 (about $25) a day or less. The best time to visit China is during April-May (spring) and September-October (autumn). During these times the temperature is pleasant and comfortable and there is little rain. The best method I found to getting around the cities such as Beijing is by using a Beijing car service – it makes life simple and easy, plus you’re guaranteed to end up at your destination.

The Forbidden City – Start your Beijing sightseeing in the Forbidden City located in the middle of Beijing. According to Chinese history, except for the officials and royal family relatives, ordinary people are not allowed to enter this imperial palace. This is why it is called Forbidden City. It is also a palace museum fully demonstrating the imperial life in Ming and Qing dynasties. Built from 1406 to 1420, the Forbidden City was declared a World Heritage Site in 1987 and is listed by UNESCO as the largest collection of preserved ancient wooden structures in the world.

Temple of Heaven – The Temple of Heaven is a worthwhile visiting place in Beijing. It is much bigger than the Forbidden City with an area of about 2,700,000 square meters. The Temple was built in 1420 A.D. during the Ming Dynasty to offer sacrifice to Heaven. The most magnificent building in the Temple of Heaven should be the Hall of Prayer for Good Harvest

Tiananmen Square – End your Beijing sightseeing by standing in the middle of the awesome Tiananmen Square, the largest urban square in the world and background to many historical events. Go just as the sun is setting and watch the Chinese military honor guards take part in a ceremony where they march and lower the national flag.

A visit to Beijing would be rounded off nicely by sampling the famous Peking duck in of the many specialty restaurants dotted around the city. The experience is fun and the duck is delicious!

The Great Wall
A visit to China would not be complete without seeing the Great Wall. You have a few options for seeing the wall, and this depends on how adventurous you are! The most popular place for a visit is at Badaling, 70 kilometers North West of Beijing. It is the most well-preserved section of the Great Wall, built during the Ming Dynasty (1368-1644). This section with an average altitude of over 3,282 feet is the outpost of the Juyongguan Pass. The scenery is beautiful and you have wonderful views of the wall snaking off into the hills in the distance. Be prepared for crowds during the weekends.

City Wall of Xian – Conclude the day by visiting the City Wall and having a bird’s view of the city. The City Wall of Xian has the largest and most integrated ancient city wall in China. It once acted as a huge military defense, and today still protects the ancient inner city of Xian.

Chengdu
Many travelers flock here to get a glimpse of the giant pandas. The Panda Research center is located just 10km (6miles) away from downtown Chengdu has been created to imitate the pandas’ natural habitat in order that they might have the best possible environment for rearing and breeding. The city of Chengdu itself is also quite nice, here you can sample the famous Sichuan hotpot or visit the Chinese Opera.

Tiger Leaping Gorge (Near Lijiang)
The most famous trekking spot in China, great for backpackers looking for an adventurous Himalayan trek. The Tiger Leaping Gorge is a steep gorge, you’ll walk along the top of the gorge and on the trail you’ll see the Yangtze River on one side and steep mountain walls on the other. Most people do the trek in two days, with the opportunity to go rafting and there are cosy little guesthouses dotted along the route. This is a great sightseeing route with many photo opportunities. Bring your camera, wear skid proof shoes, and be prepared to be astonished.

Yangshuo
A popular backpacker haunt, this city is idyllically located on a river in the Karst mountain region is probably the most well known natural environment in China. The scenery is quite spectacular and it’s very easy to while away your days here. Hire a bike and explore, sail on a bamboo boat across the river, hike through farm land, go hot air ballooning or just relax and take in the surroundings. In the evenings you can enjoy a magical laser show or visit one of the bars on ‘West Street.’